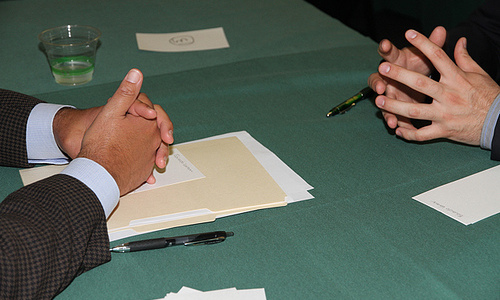 Rick McDonald:  Hello, Katlyn. How are you?

Katlyn:  I’m fantastic. How are you?

Katlyn:  We’re discussing family business owners who are preparing to sell their business. What’s really important for them to consider, Rick?

Rick: It’s really important for family business owners to take a look at, “What’s the value of the business? Is it saleable?” First things first, when you run a business, it’s successful, you’re making some money or it’s providing you the cash flow and lifestyle that you need and you’re getting a little older, it’s time to move on.

You might be a little tired of it. You’re a little worn out. You’re restless. It’s time to retire or simply move into another phase of your life.

That’s great. Terrific. The question, first and foremost is, is your business salable? Did you build something that provided you a nice income? Or, did you create wealth in the business?

What do I mean by that? Take a look at your business, if you paid yourself a fair pay, a fair compensation, if it wasn’t you? You’re going to hire yourself, what would you pay yourself? What I want you to do is recreate a whole set of books in your mind’s eye. Take a piece of paper, and take a look at what you did last year, what you’ve done for the last three years.

If you paid yourself what you should have paid yourself as a third party employee, and you took out all the extra perks, all the other things which you buried money on, you avoided taxes on legitimate but ancillary expenses that really enjoyed, influenced your lifestyle…be realistic. In the end, say what would the business have earned? Because a buyer is going to look at what did this business actually generate in free cash flow.

After paying the expenses, it needed to do, including your job. When you get that number and you drop it to the bottom line, the business is probably worth four or five or six times that number. Depending on how big your business is, the larger your business, the larger that multiplier. The bottom line is, if you get a sense of what your net earnings were and you multiply it by some number, the smaller your business the smaller the multiplier. That’s traditionally how businesses are valued.

The problem starts here, Katlyn. A lot of folks have a fine business paying them a lucrative income, but they’re not necessarily making a lot of money. That’s not a valuable business. In fact, that may not be a business that can be sold. That’s a problem, and you need to have a reality check. You may or may not have a business that will one day be sold. If you don’t, that’s a whole other can of worms. You’ve got to aggressively look at how to transition money from the business into money into your own balance sheet, your personal balance sheet, because the excess compensation you’re paying yourself today is the present value of a sale that’s not going to happen.

That’s a problem. Now, let’s say, you actually have a good business that is throwing off a fair amount of free cash flow once you’ve done my little exercise. That’s terrific.

Now, the question is, “Who is your buyer?” It’s a really important question. Is it family members? Are they going to come up with some cash to buy you out or are you going to give it to them?

It happens in both ways. Both are a reality as far as what’s really going on out there.

If it’s not family members, the kids have moved off, they have no interest in the business, that’s all fine and good. It is key employees?

Are there people in the business, right now, that would like to buy your business? That’s terrific.

Traditionally, they’re not going to have the cash to put down with some bank debt which is inevitably what’s going to happen and you better have good bank relationships to make the successful sale happen without you having to take back an awful lot of paper and that’s not a good thing.

Many, many times, we see competitors that love to buy you, but they also don’t have enough cash to put down to buy you. The question is, “Who’s going to buy you? Is the cash out there available to be used to purchase you? Are you going to have to take back paper â€‘â€‘ seller notes are not uncommon? How much should you take back?”

Key customers have wandered off because they haven’t been serviced properly and you’ve got to rebuild your baby all over again. Ask yourself, number one, “What’s my business worth? Is it saleable? How do I groom it? How do I clean up it? How do make me not being here, the Monday after I sell, not being a major distraction to the ongoing process of the business being run by outsiders?”

Identify family members, key employees, competitors, private equity firms. Who is your most likely buyer and how do you start grooming the company to look like what they want to buy?

As a great example, what I’d say to someone is, “You tell me exactly who you would want to buy as a competitor if that was your objective.” It may not be, but let’s assume. Let’s role play.

Let’s assume you’re going to buy from a competitor. What do they need to look like? What do you want to find when you walk in and look at their books, when you talk to their key employees, when you go visit their clients?

That’s going to materially improve the value of your company and, frankly, make the sale process, which is arduous unto itself, a heck of a lot simpler because you’re going to run into issues with regard to key employees being overly compensated, more so than a third party might want to pay them.

You’re going to have issues with family members working who aren’t necessarily competent enough to run the company themselves, but you want retention agreements. You want them taken care of.

All of these kinds of different nuances are bumps in the road on a successful sale, deal with them today. Not when the potential buyer is coming inside to interview your employees because they’re going to find the problem.

The sooner you tackle it head on, the more successful your ultimate sale will be.

Katlyn:  Now, you witness a lot of these sales. What are the current trends that you’ve been noticing in family business sales?

Rick:  Right now, if your business if large enough to sell and that’s a big issue. I probably meet, for every 10 or maybe it’s 20, but certainly for every 10 we bump into that would come to us, one in 10 are going to be able to be sold.

The others aren’t in position to be able to be sold. As I said before, they’re fine businesses and they’re providing fine income for the man, the woman, running the company, but they’re not a business that’s saleable.

They’re not generating enough free cash to really go to the next level, which is what a buyer’s looking for. The point I’m getting to with the trends that we see right now, though, if a company is actually generating enough cash flow right now that they’re attractive and they’re desirable, it’s “PacMan” right now.

What’s going on out there, businesses haven’t really transitioned the last five, six, eight years because a lack of capital, values being too low to be worthwhile selling, values of companies are coming up. Things are doing fairly better than they have.

Things are getting a lot rosier than they have since 2007 forward. Aggregation is probably the most prevalent of what’s going on right there. The aggregation game is very simple.

If you give me four companies, each one netting a million dollars a year…let’s say we multiply, I said a moment again, you can multiply the net earnings of, say, maybe by four or five. Let’s say, we use five.

If each company is netting a million dollars and we multiply it by five, sounds like each company might be worth $5 million. That’s terrific.

If I took all four of those companies under one roof and now had not one million, but $4 million in net earnings. I’d probably have a case to be made for not having a five times multiple, but maybe a six, possibly higher, but certainly a six.

Six times that $4 million of revenue, sounds like $24 million, not five times $1 million or $20 million, by math, alone, I’ve already created on paper value. Economy’s a scale. There’s much greater ability to attract new customers because they see I’ve got a deeper bench.

I’m a more reliable company in delivering what we’ve got because we’ve got reserves, we’ve got backâ€‘up, we’ve got a deeper capacity to endeavor glitches. All the various operating efficiencies are coming to bear.

We’re a more attractive business. We’re more valuable in terms of our attractiveness in the marketplace going forward. The point I’m getting at is that’s not lost in private firms.

Private equity firms would love to find your competitor, buy them, put some money behind them and use them as a conduit to go bolt on two, three or four other companies, not unlike synergistically to that particular company and they’re going to create a much more valuable entity just because the multipliers and the economy’s a scale.

As a seller, rather, you want to be on that bandwagon. You want to sell into the entity who’s creating a larger entity by aggregation. It’s no different than what goes on at the highest levels of commerce, all the way down to the two, three, five, $10 million business owners.

It’s happening more and more and more. We see those opportunities all over the place. The point is you’ve got to be worth a certain amount of money to the economy scale, the interest, to have the attractiveness in the first place, the economy scale for a company to spend some money on due diligence and bring you into the fold.

That’s probably everyone’s first choice. But if you don’t, and being reality, the reality is what it is. If you’re kids are not in a position to run the business, if your kids don’t have the cash to take you out of the business, then you need to take a look at a sale. Right now, the aggregation strategy is probably most medium size business owners best opportunity to realize the value of their business today.

Katlyn:  They just need to be able to ready for that sale.

Rick:  And get yourself groomed up to look like what the buyer would expect to buy in a perfect world.

Katlyn:  Well thank you so much, Rick, for explaining that.